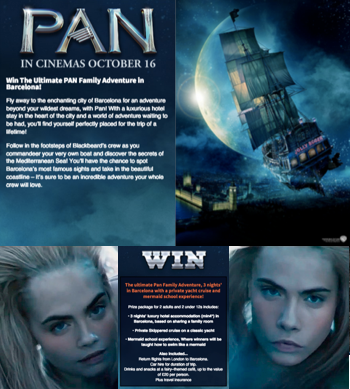 Posted at 10:51h in Blog by Sirenas Academy
0 Likes
Share

The last October to 2015, finally arrived the premiere of the film “pan, the never never land”, one of the best and biggest Warner Bros. production, directed by Joe Wright and starring by Hugh Jakman among others.

Warner Bros. is one of the largest movies, music and television films producers from the United States of America. Also, they are specialized in adapting fiction books into movie scripts, as they already did in the seven J. K. Rowling’s “Harry Potter” books.

The figure of Peter Pan realized in 1904 by the Scottish writer James M. Barrie has been placed into the big screen in several opportunities, since the first animated Walt Disney version premiered in 1953. Joe Wright the director, in this new 2015 version, explains the origin of the Peter Pan’s legend and recovers this magical character.

The Peter Pan character was performed by the child Levi Miller who plays the role of a rebel of 12 years old that lives in an orphanage in London. The lead actor is magically transported to a world of fantasy called “Never Never Land“, where pirates, Indians, fairies and mermaids live. J.M. Barrie’s original publishing “Peter and Wendy” in its chapter number 8, entitled “The lagoon of the Mermaids“, the author speaks about how Wendy meets these magical creatures. Furthermore, in the film of “Pan, a trip to the Never Never land” performed by CARA DELEVINGNE, the Mermaids still remain part of this magical island so called “Never Never Land”.

At the beginning of 2015, The Element-London Company in charged of Warner Bros’ promotions, based in the United Kingdom decided to find an award for those who were going to attend to their film.  At the end of March of the same year, the Company got in touch with “SIRENAS MEDITERRANEAN ACADEMY” Enterprise, located in Tarragona (Catalonia), to offer a prize for the contest. This award enabled to all those residents in the UK, after having seen the film should enter into a given web page and could answer a questionnaire with a deadline ending in November of that year. The key was that all those who had answered correctly would enter to a contest, where two adults and two children would win a trip and could travel to our Mare Nostrum or well-known Mediterranean Sea, the cradle of these mythological human beings.