Home > The Academy > History of Mermaids
Mermaids are known as Greek mythology beings, daughters of the Acheloos River and one of the Muses, although we can find other genealogical proposals.

Originally, Greeks considered Mermaids half woman and half bird, but, considering that all mythical stories are constantly changing along tradition, then we find that Mermaids become half fish and half woman after a dispute with the Muses, their aunts from the genealogic point of view. In ancient texts, Mermaids appear not alone but in a group of two or three and not only in the water but sitting on reefs waiting for the arrival of ships. The description of the Triton is similar, son of the sea God Poseidon for the Greeks and Neptune for the Romans. Triton was a creature with the upper part of the body with the shape of a man and the lower part with a fish tail. Triton had the power to tame the turbulent waters blowing a shell. 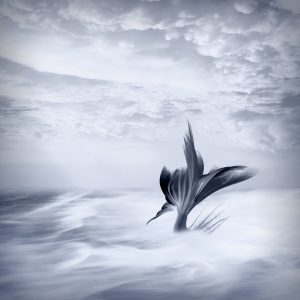 If we look back at history, we see that the first Mermaids appeared for the first time painted on caves in the late Palaeolithic (Stone Age), about 30,000 years ago, when human beings had a strong control of the land and began to sail the sea.

The Greek name “Seirén” is related in meaning to a rope, and Mermaids would be something like “the ones that tie or grab”, mainly sailors tempting and enchanting them with the sweetness of their songs. Those songs were irresistible and they fascinate anyone as their melodies were full of promises, hence the literary expression “Siren song”. Throughout history, we can see that such attraction was not only united to a tuneful singing but also to their femininity. This being is always characterized by living between two worlds, sea and earth, or between life and death because we also find Mermaids as funeral emblems accompanying with their singing those who began their journey to the afterlife. It isc lear that the first written text talking about Mermaids is the Odyssey, but as a legend or oral story, we find more Mermaids in other parts of the world. In the Middle East, the first stories where Mermaids appeared are found in Assyria in the year 1000 BC where Atargatis, a Syrian goddess who ruled the seas, was consecrated and worshiped with fish in temples full of large ponds. In China, many Chinese mythology tales talk about Mermaids as wonderful, skilled and versatile beings, whose tears become pearls. Mermaids are also found in Romanesque columns, sharing prominence with the Nereids and the Harpies.

In Ireland we find the Merrows, a species whose females are the equivalent of Mermaids, excepting for membranes in their hands. In the Scottish mythology there is the Ceasg, the “maid of waves,” a special mermaid whose lower half is a salmon. In Wales a legend says that in the sixth century a mermaid called Murga, which means “woman who comes from the sea”, was captured. She was taught to speak the native language, and she learned to sew and talk, but she never lost the ability of living in the water. In Spain, there is a famous legend about the “Sirenuca” from Cantabria, a mermaid that had once been human. Her mother was fed up with her disobediences about the ban to go to the cliffs screamed “God grant that you become a fish” and that’s the way it was. 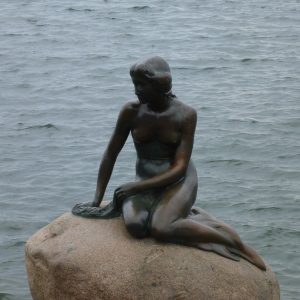 One of the most famous sighting was done by Christopher Columbus himself, who wrote in his logbook that he had seen three mermaids, but they were not as beautiful as they are represented, which somehow they had the face of a man. This assessment is ideal to illustrate the theory that the alleged sightings of mermaids have usually been sightings of manatees, walruses and other animals.

But the literary text that introduced Mermaids in history was the “Odyssey” written by Homer, who explains how the hero Ulysses had himself tied to the mast of his boat in order to listen the mermaids songs without any danger, although he is not the only one who managed to be uninjured, the Argo ship crew commanded by Jason was also unharmed. They managed to escape from the bewitching melodies thanks to a great musician called Orpheus, son of Apollo, who travelled with them and who with a magical song managed to avoid Mermaids.

That seductive singing was considered by Christians as an incitement to lust. Later, the Mermaids seduction stopped being something people could hear in order to become something more visual. Now, the images that represent Mermaids are the ones of Ladies of Water, very beautiful and showing provocative gestures to those who glimpsed at them. With all that, German Romantic poets, used to talk about monsters and wonders found in Mermaids a new motif. It is at that time when lonely mermaids were discovered solitary in Germanic rivers, and they were also confused with the Naiads and Undines. Sometimes they kept using their voice as a seductive weapon but other times it was their beauty that was attracting as one could see them in a corner while looking themselves at the mirror and brushing their long hair. Instead, the post-Romantic painters imagined them more aggressive, jumping themselves over the sailors from the sea; it was the typical image of “Femme Fatale” of the nineteenth century. In contrast, romanticism also created a kind of amorous mermaid desiring to change and become a woman, changing her tail for legs. The story of “The Little Mermaid” written by Hans Christian Andersen is a clear example of this.

So when modernizing, mermaids become an echo of the old seductive creatures, everything mythical evaporates and even trivializes, therefore from the ‘Sirenas Mediterranean Academy’ we want to give to that figure of mermaids all the lost magic and mysticism, as a vehicle for teaching the marine world and the history and stories of the “Mare Nostrum”, the Mediterranean Sea.