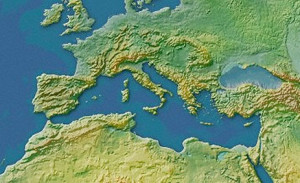 The forces tectonic plates, which still today move the earth’s crust, caused the separation of the continents. It was not a fast phenomenon, it took many years and it induced oscillations in sea level that brought the seawater to current Germany. The result was a sea that we currently call the Mediterranean, and it is divided into two basins, the West and the East. The Mediterranean is a sea with names that correspond to all the seas that it comprises: Alboran Sea, Balearic Sea, Liguria Sea, Sea of Algeria, Tyrrhenian Sea, Ionian Sea, Adriatic Sea, Aegean Sea, Levantine Sea, Sea of Marmara, Black Sea. 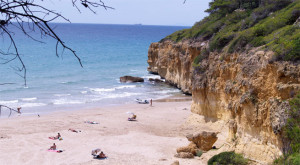 The maximum depth we can find in the Mediterranean is 4,384 meters, corresponding to the Levant Sea, between the island of Greta, Turkey and Egypt. A thing to keep in mind is that the deepest known point in the whole world is located in the Pacific, right in the Mariana Islands, where the depth reaches 10,900 meters. The Mediterranean Sea is almost a closed sea, it only has a point where the water enters and leaves and this point is the Strait of Gibraltar. This strait was created naturally, thanks to the movements of the Earth’s crust unlike the Suez or the Bosphorus channels that were created by man. The Strait of Gibraltar is only 300 meters deep, and for this reason the Mediterranean Sea does not receive much water from the Atlantic Ocean, and it suffers higher salinity, which is also accentuated by the high evaporation that suffers during the months of the hottest seasons.

Three different categories are represented in the Mediterranean: Plankton, Nekton and Benthos. Plankton is a group of plants and animals that live floating in ocean currents, as for example jellyfish. Most plankton is microscopic. Swimming organisms from small invertebrates to fish composes the Nekton, and examples of this are cuttlefish and salmon. The Benthos includes immobile or partially immobile animals and plants that are in the depths of the sea, such as the Posidonia algae.

Some of the most common fish in the Mediterranean Sea are: the bream, which inhabits coastal waters; the gilt-head bream, which inhabits in shallow waters of both rock and sandy depths; the red sea bream that is a common marine fish that can be found in the European shores; the sole fish, which belongs to one of the existing species of flatfish; the sea bass, a fish that can be found both the Mediterranean Sea and the Atlantic Ocean; the Mediterranean rainbow wrasse, which lives on rocky bottoms close to the Posidonia; The East Atlantic peacock wrasse, which also lives close to the Posidonia meadows; The John Dory lives close to sandy or clay depths; the sardines, a fish that live in banks from 10 meters depth and finally the castanet, a fish that can be easily found near the rocks and Posidonia at a distance of 4 or 5 meters depth.